After a good couple of weeks to start off in September, we wrapped up the portion of our trip in Spain. The stops included Barcelona, Moncofa, Valencia, and a flight out of Madrid. This post details our time in Valencia. 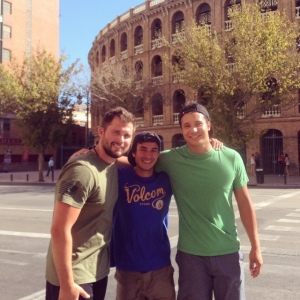 Outside the Plaza de Toros

How about that train ride in? After the long awaited arrival, we eased our way into the third largest city in Spain. With a few alterations to the trip itinerary, we decided to leave Moncofa early in order to squeeze in another city before Jesse left. We also missed hearing english voices. I personally dislike not being to have small talk at a grocery store- standing there in silence isn’t my thing.

Well my dream of sporadic english conversations quickly faded. Valencia seemed to be more off the map for native english travelers than my hopes of another Barcelona. When we checked into the hostel (Purple Nest Hostel), there wasn’t anyone else there besides the typical attendees; Germans, who tend to travel in packs but are kind enough for conversation, and the French, who could care less for conversation. Having Jesse around though made up for the lack of english.

Leaving the spacious three bedroom apartment, we had to adapt to a shared space once again. There was already one bag in the eight-bed dorm room and it took up half the space. Skinny jeans, a few black shirts, some stale leftover donuts (taste-test) and size 9 skater shoes let us know who was staying with us. With the day to unwind, we left the hostel and explored. 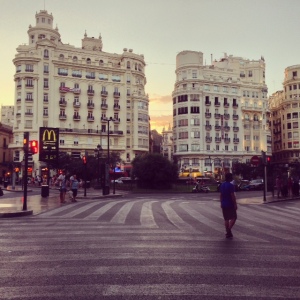 The city is beautiful. We were in the center surrounded by picturesque spanish architecture and old women hanging clothes out the windows. There were cathedrals centuries old next to newly renovated gelato shops. It was essentially La Ramblas on a smaller scale. And just like Barcelona was, every block had at least one building with construction work going on.

As the next few days went by, we found a routine to our daily order.

The running trails in the old river bed

Within those few days, a couple of other notable events occurred.

We got creative with our skills

And did hand stands

Rooted from the pacific northwest, undergraduate student in Colorado
View all posts by Levi →